During the weeks following the Advertising Futures Kickoff, students gained first-hand knowledge of the creative process for developing an advertisement from their partner agencies. On October 3, 2012, students presented their original advertisements to a panel of advertising experts and an audience of their peers and supporters at JWT Headquarters. Ron Berger, one of the founders of Advertising Week, mentioned, “This is the BEST part of Advertising Week.” Agency mentors, from Draftfcb, Profero, McCann, Vidal, and other leading advertising agencies, proudly cheered as the students showcased their talent and innovative ideas. 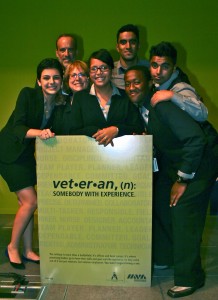 A team from Abraham Lincoln High School, mentored by Deutsch, won top honors with a campaign whose advertisement and slogan, “veteran-one with experience,” was original, straightforward and compelling. Students from the Academy of Finance and Enterprise, mentored by G2, came in a close second with an ad that was graphically interesting and emphasized traits such as hard work, dedication and character that strongly recommend veterans as employees. The winning campaigns will appear in The New York Times where the schools and agencies will be credited.  The winning ad will also be featured on a billboard in New York City’s Times Square.

Inspired by the importance of the issues at hand, students demonstrated their skills through research-driven, thoughtful and persuasive campaigns. Ed Vick, competition judge, career advertising executive and president of IAVA, was so impressed by the performance of the Virtual Enterprise Students that he agreed to host an intern at the IAVA. In all, Advertising Futures 2012 was an inspiring display of how close collaboration between the educational community and industry partners results in a diverse, talented work force.

VE extends a special thank you to the Advertising Club, JWT, and advertising agency mentors who worked with our exceptionally talented students!

The people have spoken! Click here to see the results of the Ad Futures People’s Choice Voting.