Please join us for three days of collaborative training and professional development, including workshops, presentations, networking, and special events!

Registration for the conference is now open!

Please print your ticket pass or plan to pull up the PDF on a mobile device to check-in at the conference each morning for attendance tracking.

ALL CONFERENCE ATTENDEES – In Person at Long Island University

No invoice will be generated by Virtual Enterprises International. Our EventBrite registration will list your pass as “free” because the NTC Conference Registration Fee is included in the school’s Program Participation Fees for the 2022-23 school year.

Budget planning for a teacher traveling from out of state would include:

Complimentary shuttles will pick up at JFK and LGA Airports at 3pm or 6pm ET, and will drop off at The Roslyn and LIU Post Campus. Attendees arriving by air on Sunday may reserve a shuttle seat during registration.

During the conference, a shuttle service will be available to take participants from The Roslyn Hotel to the LIU Campus. The shuttle schedule will be posted closer to the event.

Notes for the Week

Attire: Attendees should plan to dress in business casual attire.

Bring Your Own Device: The conference will be BYOD “bring your own device”

Internet Connectivity: Wireless internet will be available for all participants throughout the week.

Announcements & Updates: We will be using Remind to send SMS text message updates to participants throughout the week. If you don’t wish to receive these messages, please contact Susan Chan at schan@veinternational.org.

Sharing Media: Please share any photos or videos you take during this year’s NTC by dropping your content in this folder.

(NOTE: the Photo Consent Form is also included as part of the NTC registration. Only one consent form is needed per person).

This summer, rising high school seniors can pursue their passion and get a taste of college life at LIU Post’s residential campus in New York. The Summer Honors College at LIU will give students the chance to immerse themselves in different fields of study. Students work closely with distinguished faculty mentors and gain invaluable experience through hands-on projects and field trips. Students can earn college credit for one or both summer sessions offered from July 11 – August 5 at a tuition rate of $500 per course. 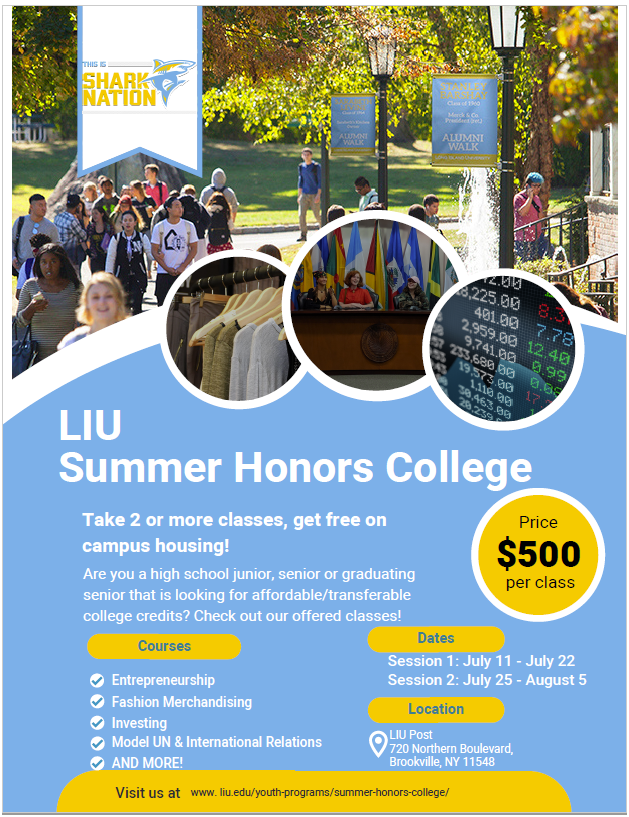 Please contact us immediately in the event of any issues or major concerns. Susan Chan, National Events Manager, schan@veinternational.org