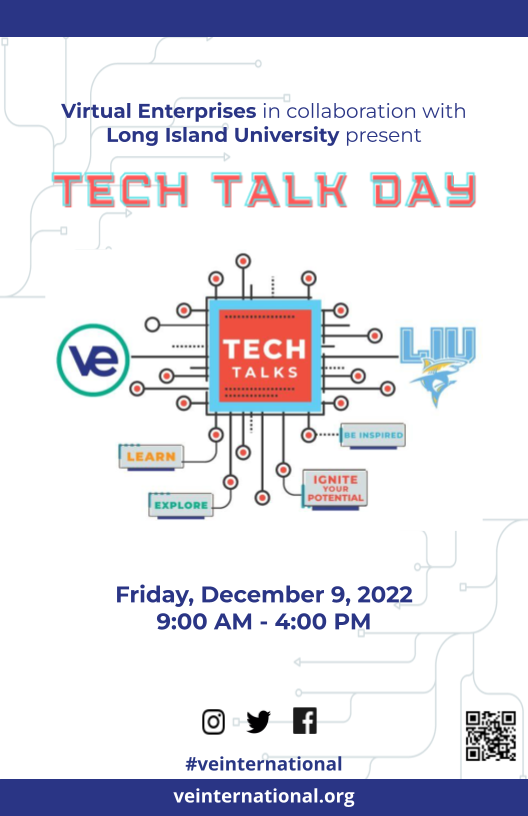 VE closed an exciting year of business conferences, exhibitions and learning opportunities with the launch of Tech Talks, a series of events that bring technology and innovation leaders directly to VE students who learn from their expertise.

Held in collaboration with Long Island University (LIU), Tech Talks kicked off on December 9 at LIU’s Brooklyn campus with a morning session on artificial intelligence (AI) and augmented reality (AR) – two of the fastest-growing fields within the computer science industry. LIU professors George Baroudi and Nicolas Gallo led the introduction and elaborated on the roles of AI and AR in the gaming and healthcare industries. Al Kahn, CEO of Kidtagious Entertainment and licensor of brands such as Pokemon and Cabbage Patch Kids, then dove deeper into these topics, exploring how AI and AR are changing the way we live. Students even had the opportunity to interact directly with a live AI chatbot!

After a networking session and lunch, the day’s second session focused on innovation and entrepreneurship, led by Matt Hostetler and Brook Bello, Ph.D., of Mission 3A, a venture capitalist firm, and Andrew Boryk of Lunchbox, a modern online ordering system for restaurants. Hosteltler and Bello discussed stories of their business building processes, and Boryk, a VE alum, shared insights about his business venture that is disrupting the restaurant industry.

The day culminated in a competition where VE student-entrepreneurs brought their innovative ideas before investors through a short pitch presentation. First, second, and third place winners received cash prizes and the opportunity to be mentored by Mission 3A venture capitalists to bring their idea to life. Among them were grand prize winners Mert and Alp Kanibir, twin brothers who recently emigrated from Turkey and are high school juniors. The brothers, one of whom is legally blind, had an idea for an application that allows visually impaired people to shop in grocery stores without the assistance of another person. Mission 3A will now assist them in honing the idea to bring it to market.

In a recent LinkedIn post, Mission 3A recapped their involvement in Tech Talks: “Mission 3A has partnered with Virtual Enterprises International, Inc. to provide mentorship opportunities to students in their program, and assist them in developing and executing their best ideas. We believe over time this partnership will have a multiplier effect on impact and innovation for both organizations.”

VE’s second Tech Talks event on December 12 featured a two-hour session on Crypto Culture, specifically that of blockchains, cryptocurrencies and non-fungible tokens (NFTs). Guest speakers included Jonas Pauli and Dyland Ireland from Casper, a blockchain company. During the two-hour session, VE students learned the fundamentals of blockchain, how it got here and why it matters. A demonstration of its use in finance and gaming was also given.

VE is grateful for the instrumental assistance of Long Island University, Mission 3A, Lunchbox and Casper in bringing Tech Talks events to reality.